In some scenarios you might want to verify that the computer running the TS in question is connected to cabled network and not Wi-Fi. The script I have written for this purpose sets a TS variable called “ContinueTS” to True or False based on what the end-user choose to do when confronted with a messagebox.

So lets take a look at the script. First we set the variable to True and check the status of the ethernet connection using the Get-NetAdapter cmdlet.

If the cable is not connected, this query will give nothing back. In other words the $EthernetConnection variable will have a $null value. In this case the script continues from the next line:

First we hide the TS progress to make way for the messagebox to be created later. Then we load the [System.Windows.Forms] .Net class to allow us to work with messageboxes and pipe this to Out-Null as we do not care about the output of the command.  Lastly we set the $OutPut variable to be used later.

Next we create a loop:

This do-loop will loop as long as the $EthernetConnection Variable equals $null and the end-user presses “OK” in the messagebox created at the first line. The number 1 at the end of the first line in the loop, creates a “OK/Cancel” messagebox. If a cable is connected and the OK button is pressed, the script skips to the final portion, but if the cancel button is pressed then this section will run:

Now to the sequence:

We’ll leverage ServiceUI.exe from MDT to break out of the Task Sequence environment. The file can be aquired at the following locations:

Place the executable and the PowerShell script in a package and add run command line:

It will then break out of the TS environment and pop the messagebox if an ethernetconnection is not active: 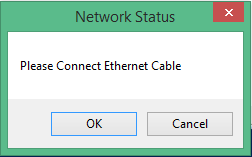 As mentioned earlier, the box will loop until a cabled connection is detected or the user chooses to cancel.

The second task sequence step called “Break Sequence” is simple a package with a program trying to launch a non-existent file and it has the following condition:

You could of course use the condition on all the following steps or on a top folder/group instead.

And thats it! The full script can be downloaded here:  and please leave your comments below.
Verify-Connectivity